We had the most amazing time on our December vacation to St. Maarten, St. Barth’s and Saba. Our morning started with an early drive to Jacksonville International Airport to catch our JetBlue flight to FLL then SXM. We arrived in St. Maarten around 2pm and made our way to our Avis shuttle driver who took us to get our rental car. We originally rented a compact car but it had a flat tire when we arrived so we were upgraded to an SUV. Thank goodness! Some of the driving around St. Maarten can get a bit crazy, so it was nice having something larger to drive around.

We rented an Airbnb for the first part of our stay and it was definitely an adventure trying to find our way to our place. Our house was in Les Terres Basses, a beautiful and quiet area of the island. We had to pass a security guard to get to the house and then drive down some smaller roads to reach our home. We had a bit of trouble finding the place at first, but we eventually figured it out.

The home is owned by a very nice French gentleman that met us as we were pulling up. He showed us to our room which had a kitchen area, bedroom and bath, as well as an outdoor private area with a hot tub. There was a shared area of his house with a rooftop pool and beautiful gym overlooking the island. Lucky for us, we were the only guests there at the time so we had the entire place to ourselves!

The owner of the house gave us some great recommendations on beaches and restaurants nearby, so we set out to explore. Our first stop was Plum Beach. This was our favorite beach of the trip. We were starting to get hungry so we didn’t stay long but did venture back several times over the next few days. Our next stop was Porto Cupecoy for dinner. Porto Cupecoy was right on the French/Dutch border and about a 5 minute drive to our Airbnb. This area became our go-to dinner spot for the next five nights. We grabbed a quick drink at the bar while admiring the views and then had a delicious dinner at Mama Pizza.

We were pretty tired after a long day of traveling, so we decided to do a quick stop at the local market to grab a few things before going back to our house for the night.

The next morning we woke up pretty early and made the quick drive to Plum Beach. We even made a furry friend while we were there! 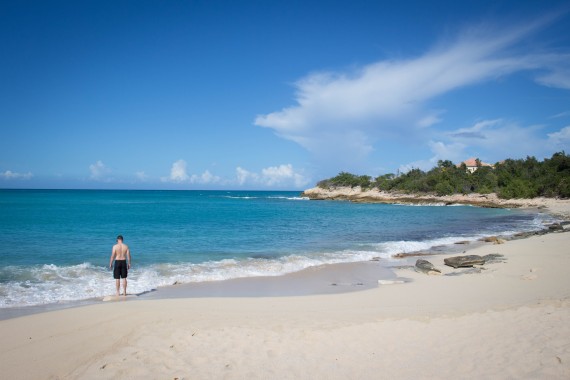 We spent about 90 minutes at the beach before going on a self-guided driving tour around the island. We started driving up north towards the French capital, Marigot. We decided not to stop in Marigot since we had plans to stay up that way later in the week. Unfortunately we never made it back to the French side because of a protest that started the following day and was still going on when we left to fly home.

After passing through Marigot, we decided to check out Pic Paradis. Pic Paradis is a beautiful lookout area that you get to by driving up a steep, one-way road. The drive was slightly terrifying but beautiful at the same time. We eventually reached a point where we could no longer drive any further. There was a trail to hike the remainder to the top but it started to sprinkle and get windy so we decided just to snap a few photos from where we were then head back down. This was also place we were hoping to visit again later in our trip but the strike didn’t allow us to do so. 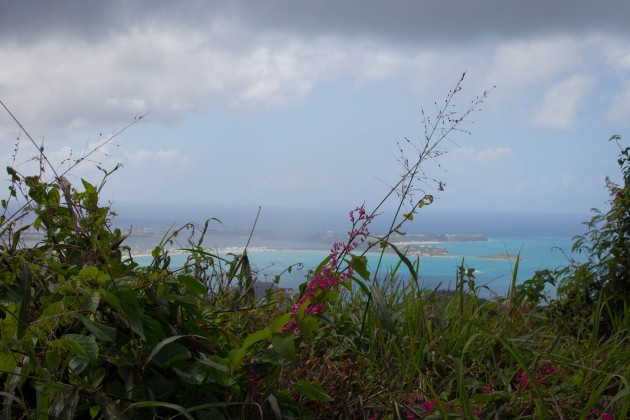 We continued our drive through Grand Case and then made our way back south towards the Dutch capital of the island, Philipsburg. Our drive was hilly with beautiful views. We passed several iguanas, a herd of goats and then almost hit a horse that walked out of a bush and onto the road just as we were driving by. YIKES!

Philipsburg was a busy city and very touristy. There are a few cruise ships that port there each day, so it is definitely geared towards tourists. We normally like to stay away from tourist traps, but it was nice to walk around and check out the shops for a bit.

Our next stop was another tourist must-do in St. Maarten, Maho Beach. Maho Beach is located right next to the airport and a popular spot to view airplane landings and takeoffs. We had some drinks at the beach bar and watched a few of the planes come in. Pretty cool! 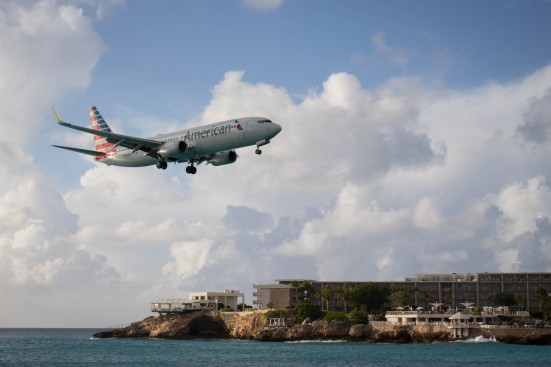 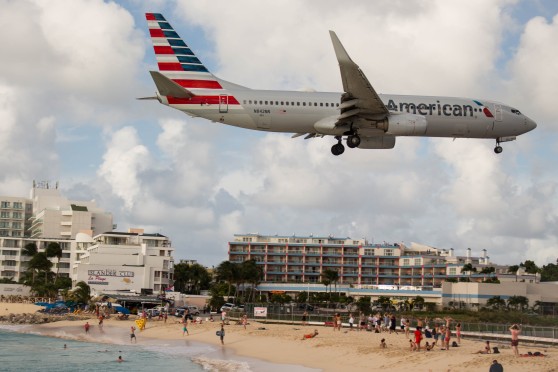 After a full day of activities we were starting to get tired. We headed back towards our house, making a quick stop at Plum Beach to catch the sunset. It was slightly cloudy, but still made for some great photos.

We went back to Porto Cupecoy for dinner. This time we decided on Thai Savanh’, a delicious Thai restaurant. The wind was starting to pick up when we left and it looked like it was about to storm. We made it back to our house just before it started to rain. The bad weather continued through the morning and was the reason our Thursday excursion to St. Barth’s was cancelled. Luckily we were able to reschedule it for a later date.

The weather cleared out on Thursday late morning and it turned out to be a lovely day, despite the wind. We decided to have a relaxing day at the beach, so we checked out Mullet Bay. It was a bit touristy but still a neat place. There were beach chairs to rent and a few beach shacks serving food. We grabbed a burger and read on our beach chairs for a few hours. It was delightful! 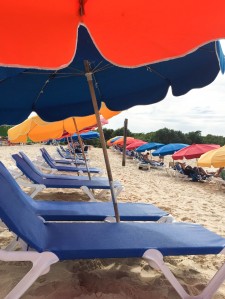 We moved our beach day to our house around 3pm and relaxed at our rooftop pool. I miss that place so much!

Later that evening we decided to catch another sunset at Plum Beach before heading to Porto Cupecoy again for dinner. This time we ate at a delicious Italian Bistro. While we were there we received an email that our Prickly Pear & Anguilla excursion had been cancelled for the next day because of the high winds. This bummed us out a bit, but we did find a new excursion to Saba that we booked for a few days later.

On Friday we woke up early and had a delicious breakfast at Top Carrot restaurant and then headed to check out Fort Amsterdam. To get to the fort, we had to enter a private hotel area, park in the hotel parking area and then walk the remainder of the way. The resort was Divi Little Bay Beach Resort, a beautiful resort that we would later book for the last few days of our trip.

Our walk to the fort was a short one. It took us up a small hill to some amazing views. This cute iguana was admiring the views too.

Fort Amsterdam was built by the Dutch in 1631. Shortly after, it was overtaken by the Spanish who used it as a military post until 1648. 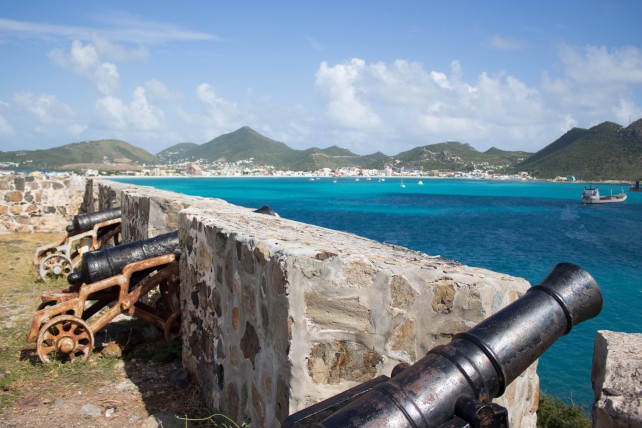 Over the years, the fort switched hands between the Dutch, English and French. 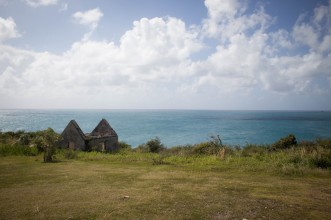 Not much remains of the fort now, but it is definitely worth a visit for the views! 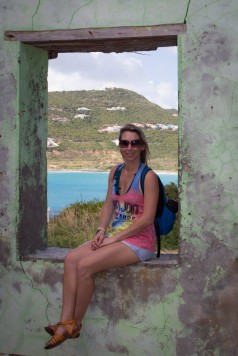 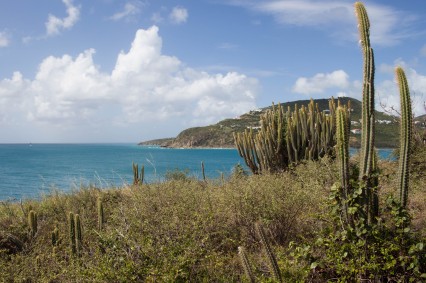 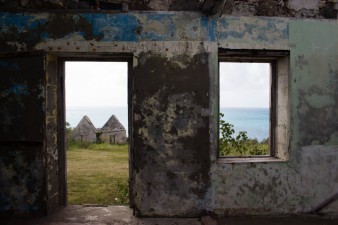 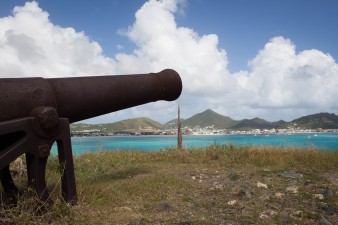 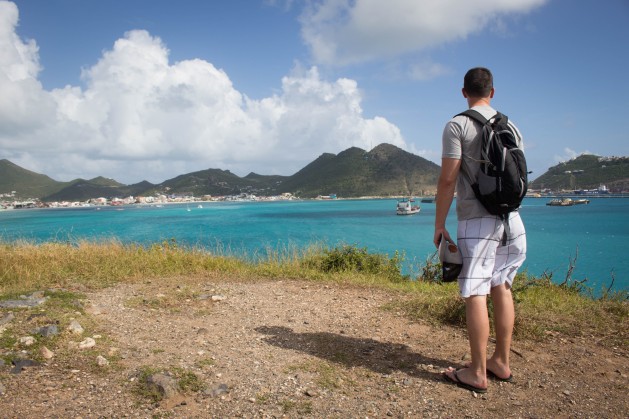 After spending quite a bit of time admiring the views at Fort Amsterdam, we made our way back towards our house to check out the other beach nearby, Long Bay Beach. This beach was beautiful and pretty secluded like Plum Beach. We walked quite a ways down the long beach (hence the name, Long Bay Beach) and came upon a charming hotel, La Samanna. Out of curiosity we looked up the rates to the hotel. Rooms were over $2,000 a night, so slightly over our budget. Maybe next time. 😉

We went back to our home and got ready for dinner at Porto Cupecoy. We decided to go back to the Thai restaurant again because it was so good! After dinner we went straight to bed so we could get some rest before our trip to St. Barth’s the next day.

We definitely had some mishaps in the first few days of our trip, but it was still an amazing time and we made the best of it. CLICK HERE to read about the rest of our trip and our ferry ride to St. Barts!