This past July we had the most amazing summer vacation in Thailand. This was our first International vacation while living in Korea and it is easy to say that it was one of the best vacations we have ever had.

We took an early Saturday morning flight out of Seoul to Bangkok. The flight was an easy 5-hours on Korean Air (our new favorite airline). We all had tv monitors on the seats in front of us and could actually see the pilot’s view the entire flight; the landing was awesome, to me at least. Adam flies planes multiple times per week so he didn’t get a kick out of it like I did.

​​
Our hotel in Bangkok was called SO Sofitel Bangkok and was about a 30 minute taxi ride from the airport. The hotel was very chic and in a perfect area that was close to restaurants, bars and an awesome night market. Our favorite part about the hotel was the amazing views from both the pool and our hotel room. Pretty awesome, right? 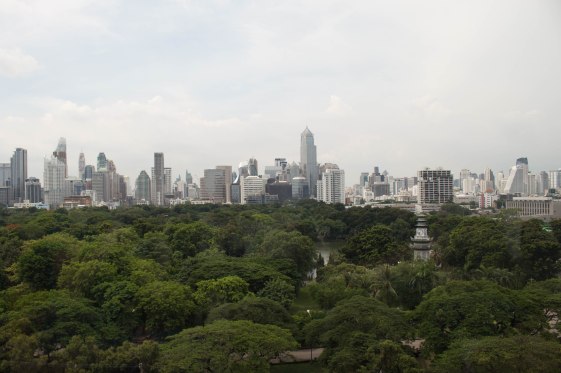 Once we arrived at our hotel we decided to relax by the pool for a few hours. We were starving so pizza with a side order of fries from the pool bar was our first meal in Thailand. So American.

After catching a few zzz’s we ventured out to Sky Bar which is at the top of the State Tower on the 63rd floor. It had the most amazing open-air views of the city; a definite must-do for anyone visiting Bangkok.

After having a quick drink and watching the beautiful sunset we ventured to Cabbages & Condoms for dinner. A former boss of mine has a nephew that is an amazing chef in Shanghai and he suggested we visit the establishment. The restaurant is definitely not as naughty like the name implies. It was actually a quite humorous place with delicious Thai food. Yes, that is in fact a photo of me with a Santa Claus made out of condoms.

By the end of dinner we were completely exhausted, plus we had an early morning pickup planned the next day for our elephant excursion. We decided to call it a night and took our first Tuk Tuk ride back to our hotel. It was awesome but scary at the same time.

The next morning we were picked up at 7:00am by a private driver from Bangkok Day Tours. The tour we chose was called Extraordinary Elephant Day Trip. We were hesitant at first to book anything that involved riding elephants because of what we had heard about the abuse and mistreatment of the poor creatures. We read some great reviews on this particular excursion so we decided to go ahead and book the full day trip.

Our first stop of the day on our tour was at the Floating Market Damnoen Saduak in the Ratchaburi province. We were able to hop on a boat and check out the numerous vendors selling food, souvenirs, clothing and many other items off of their boats. We tried some delicious coconut ice cream and I got a cute elephant souvenir. We also took a photo with the most adorable lemur. I could not convince Adam to let me take the cute little guy home with us, unfortunately. 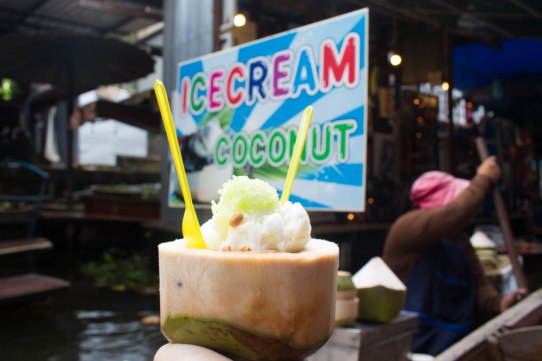 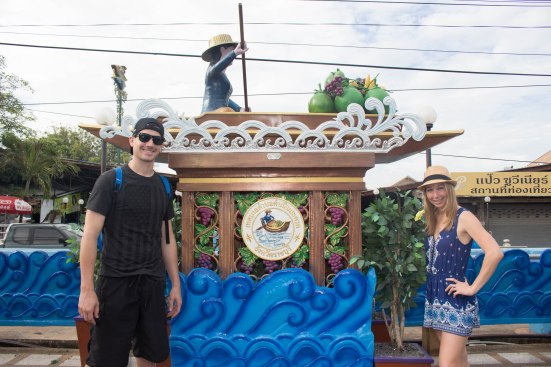 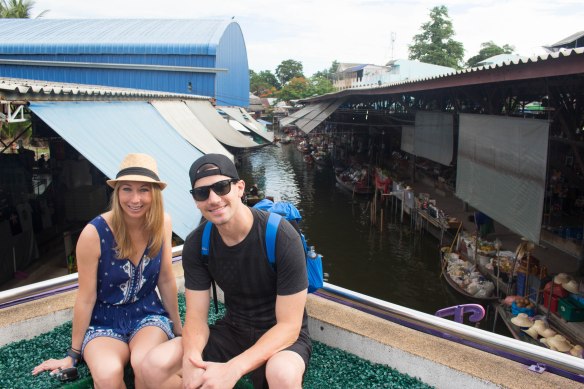 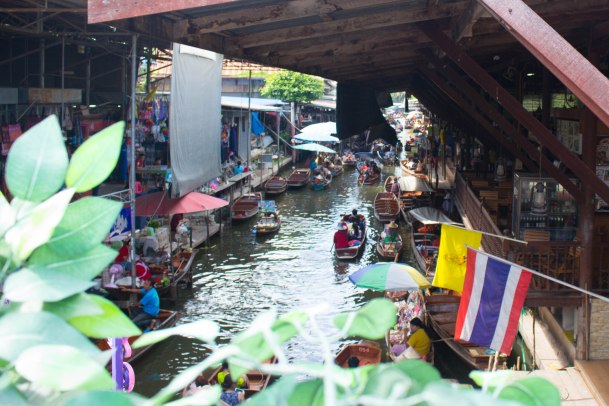 After we spent a good 30 minutes or so on the boat we visited a few of the street markets by foot. We found some awesome deals here but realized later in our trip that Khao San Road in Bangkok has even better deals. We do not regret this stop though, as the experience was definitely worth the extra money we paid.

Our next stop on our day trip was the Bridge over the River Kwai in Kanchanaburi. The railway is about 260 miles long and stretches from Ban Pong, Thailand to Thanbyuzayat, Burma. It was built by Japan in the 1940’s to support forces in the World War II Burma Campaign. It is estimated that 180,000+ Asian civilians and 60,000 POW’s were forced to work on the railway; approximately 90,000 of those workers passing away because of starvation, malnutrition, weather conditions, etc. I feel kind of guilty for smiling in my pictures now after reading more about the history. 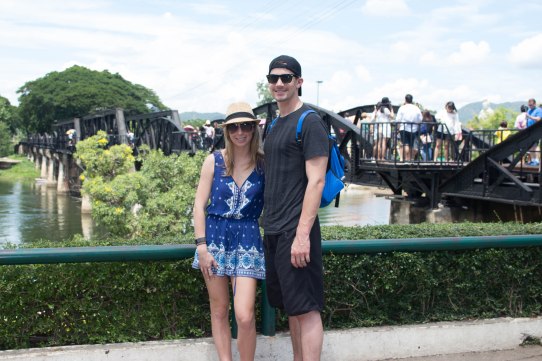 After visiting the bridge we stopped for lunch at a local Thai restaurant. It was so delicious! I forgot to take photos of my food. 😦

The drive from our lunch stop to the Maha Wang Chang Elephant Village in Kanchanaburi was about 30 minutes through a hilly/jungle area. When we arrived at the camp we were greeted by this red-head, cutie-pie. Adam and I fed it a bottle and a bunch of bananas; so sweet! 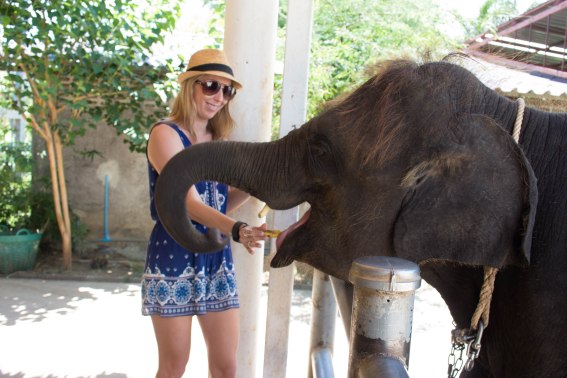 Before taking the elephants for a swim we took them for a quick ride around the property. I felt as if this part could have been skipped because it was extremely hot and I felt bad for the elephants. 😦 Luckily they seemed to have a wonderful time when we were in the water with them, so I felt a little better about everything after that experience. 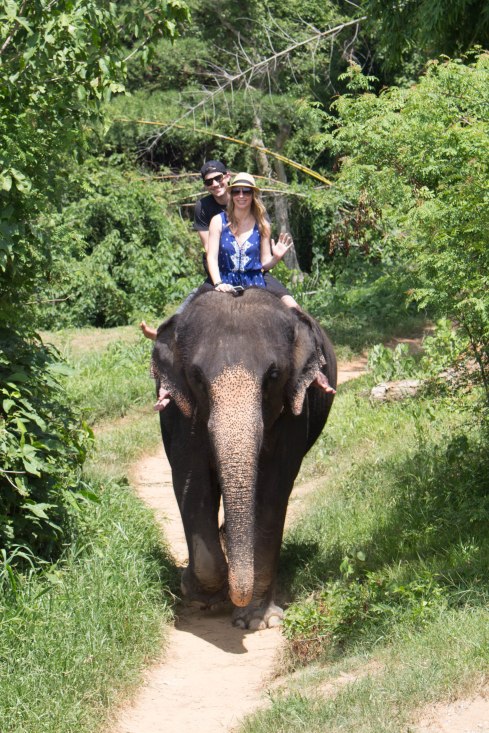 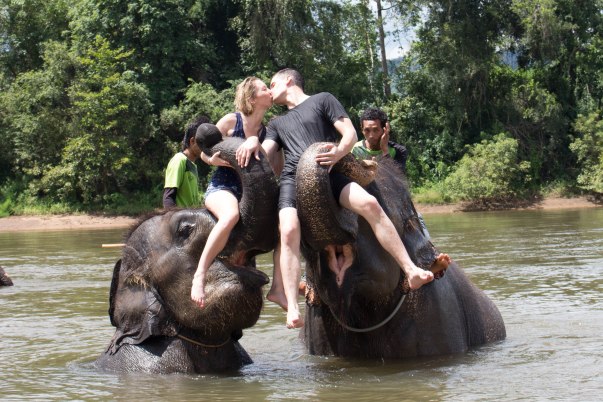 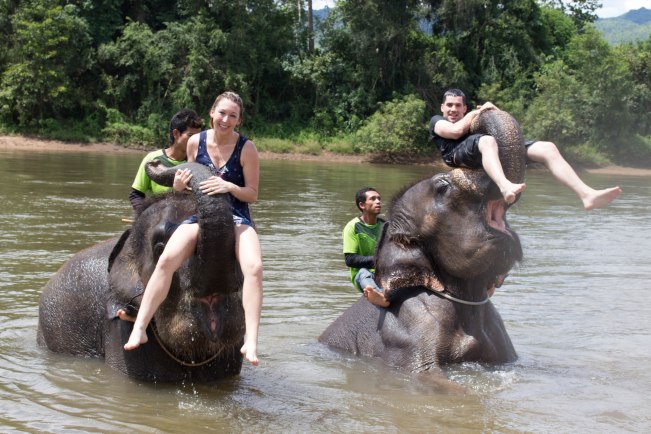 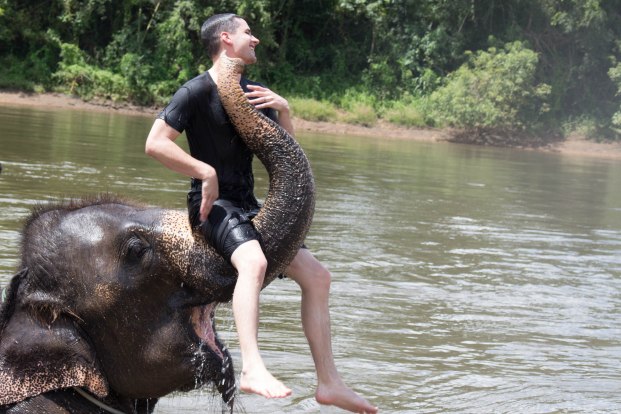 This day was an absolute blast. Swimming with the elephants was our favorite part. They would stand up on their hind legs while we were sitting on their trunks and slam us down under water. It was definitely a once in a lifetime experience. For more of our elephant excursion photos you can check out our Flickr account HERE.

After a long day full of adventure we were able to take a nap on our 3 hour van ride back to our hotel. We decided to have a somewhat chill night so after cleaning up we visited the Khao San Road market and had a nice pad thai dinner with some Chang beer. We did a little shopping before heading to the Patong Night Market for even more shopping, then hitched a Tuk Tuk back to our hotel and called it a night.

The next day we had an afternoon flight from Bangkok to the island of Koh Samui. We definitely didn’t want to leave Bangkok without checking out the Grand Palace, so we woke up early thinking we could beat the crowd. We were wrong. It was neat to see but I felt like we were in a cattle drive. There were so many people and it was miserably hot. We stayed a whopping 20 minutes before we made our way back to the hotel to scoop up our luggage and catch our flight. 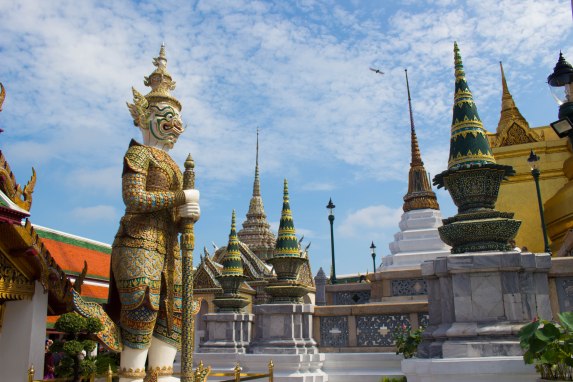 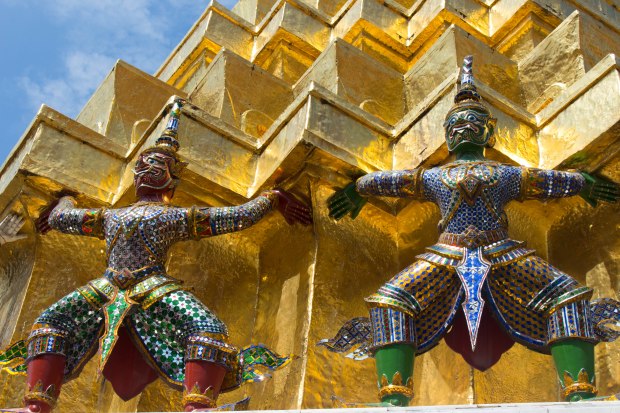 That about wraps it up for our Bangkok adventure. Be sure to check back soon for our post on Koh Samui. I am hoping to have it up sometime this week along with some of our trip videos I have yet to figure out how to edit.