Day Trip to the DMZ

We have lived in Korea for a year and eight months but just recently made a trip to the DMZ. The trip has been on our bucket list for a while now and was definitely an interesting experience. We started off our tour with ITT on base, leaving Songtan around 9:30 in the morning. It was about a two hour drive to our first stop, Imjingak Resort Park. The bus showed a documentary by the History Channel about the DMZ on our way which was neat to watch.

The Imjingak Resort Park had a few interesting sites. The picture above is the Peace Bell. This bell represents the hope for peace and unification of the Korean nation for the new millennium. The bell weighs 21 tons and has 21 stairs to commemorate the 21st century.

Along the fence are a variety of ribbons with names and notes written on them. This serves as a place of remembrance for families separated during the war. 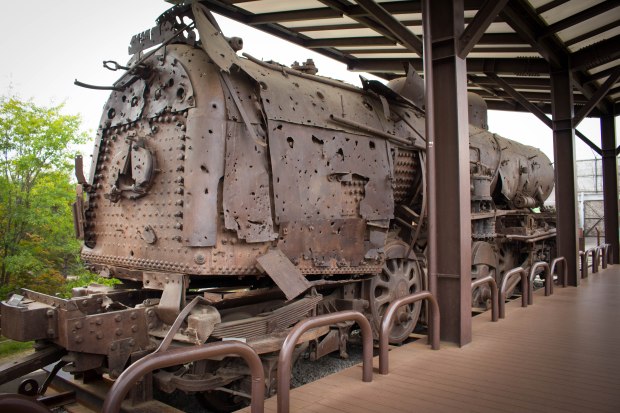 The steam locomotive has been exhibited at the park since 2004. It is a symbol of the tragic history of the division of North and South Korea. The locomotive was derailed by bombs during the Korean War. More than 1,020 bullet holes can be found on the locomotive. 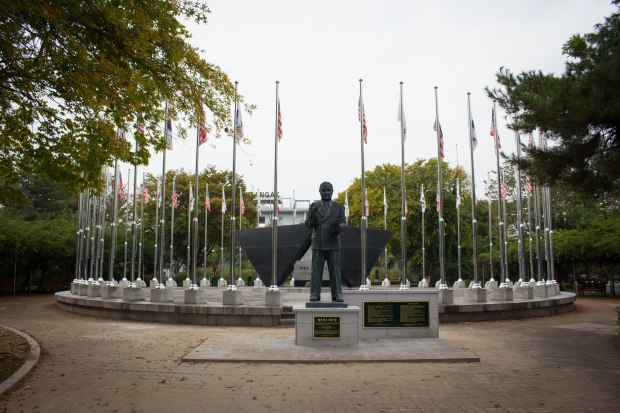 This memorial was erected by the ROK in gratitude to the USA for their sacrifices and achievements. 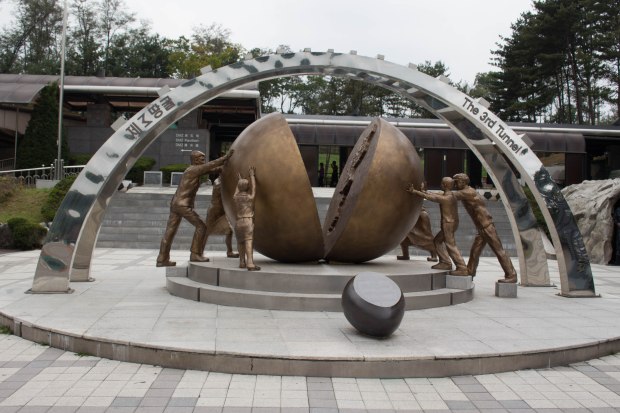 After touring the park, we made a quick stop for lunch at a Korean restaurant and then hit up our next stop, DMZ Tunnel #3. This third tunnel is one of four tunnels under the border between North and South Korea. The tunnel was built by North Korea through bedrock underground and is approximately one mile long. It was originally designed for a surprise attack on Seoul but is now a tourist site that is heavily guarded. We were not allowed to take any photos inside the building. All of our belongings had to be put in a locker before we could enter the tunnel.

We entered the tunnel through the gift shop building after we were all given hard hats. It started off as a steep hill with a rubber surface that was about 250 meters or so long. The tunnel took a turn to the left and evened out a bit. The second part had very low ceilings (cold/wet bedrock) so we had to hunch over as we walked. Once we reached the end (about another 250 meters) we could see another barrier through a small hole in the wall.

Our next stop was the Dora Observation Point. We were able to see North Korea from here and listen to the propaganda music blaring over the speakers. 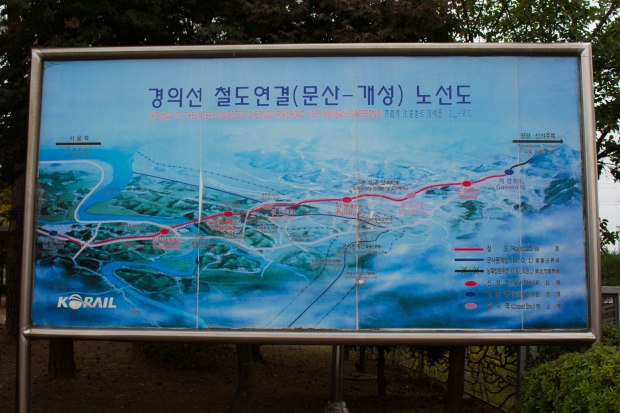 After spending about 30 minutes at the observation point we stopped off at Mt. Dora Train Station (Dorasan Station). The station was built in hopes of one day reuniting the North and South. In December of 2007, trains began traveling on the line to North Korea to take materials to the Kaesong Industrial Region. A year later, the North Korean government closed the border after a disagreement with South Korea.

This part of the platform shown is the Unification Time Wall. The left side shows the time the division was stopped in Germany and has a piece of the Berlin Wall in the middle. The right side shows the current division of the Korean Peninsula as it continues. If North Korea were to reopen the border, the railway could connect Korea to Berlin. 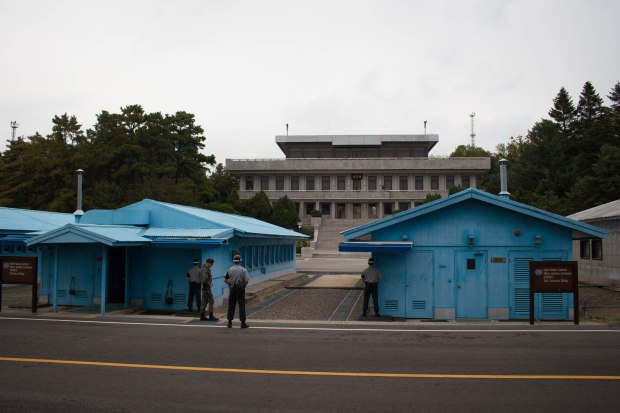 Our last stop of the tour was the Joint Security Area (JSA). The DMZ is a barrier that divides the Korean Peninsula in half. The JSA is a small area near the western end of the DMZ. This site is used for diplomatic engagements and is the only portion of the DMZ where you will find North and South Korean forces standing face to face. We had to sign waivers before this stop that basically said we were entering a hostile area where death or injury could occur. No big deal.

If you look closely you can see the small platform/step connecting the buildings halfway through. That is the divide between North and South Korea. 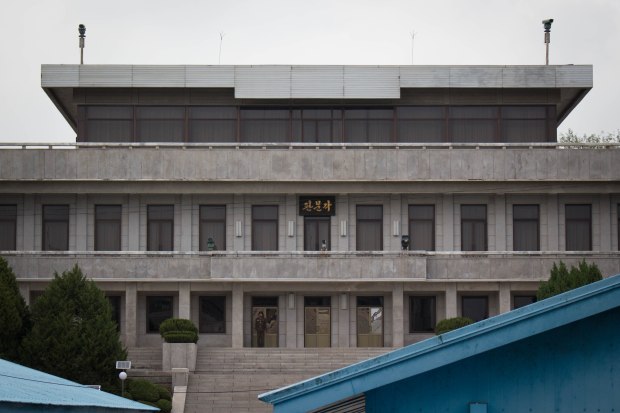 The building above is guarded by two North Koreans. You can see one standing at the top of the stairs. The other observes from the window. 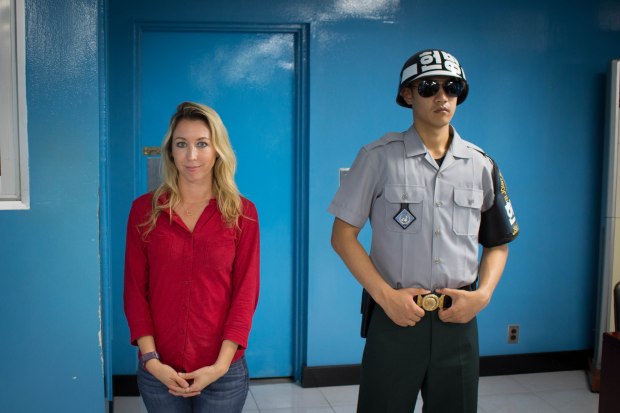 When taking photos with the guards we were told to keep a nice space in between us. I accidentally ended up touching shoulders with the guard because I was nervous and forgot. This resulted in an awkward photo. I didn’t know if I should smile, keep a straight face or cry.

The table the guard is standing in front of is where the diplomatic engagements take place.

We were told a few interesting stories about meetings that took place here. During one meeting the KPA/CPV sawed the chair legs of the UNC down so when the meeting took place they had to sit lower than the KPA/CPV and look up at them.

At another meeting the UNC had a larger flag than the KPA/CPV. The next day, the KPA/CPV showed up with a larger flag. At the next meeting, the UNC brought an even taller one. This went on and on until finally a meeting was called and flag regulations were made. 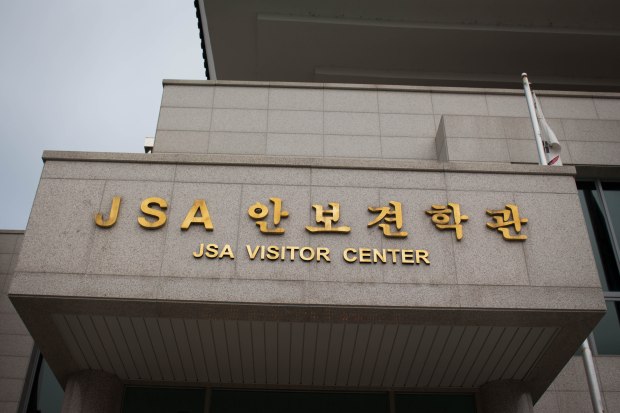 We learned quite a bit on our tour and were so happy we finally took the time to go. It was a long day (10 hours) but definitely worth it. We can now say that we have visited NORTH KOREA! Kind of… 🙂

2 thoughts on “Day Trip to the DMZ”