We started off race-day by grabbing a quick bite to eat at the hotel before departing for Huangyaguan at 5:00 in the morning. There was a pre-race ceremony before Start Wave 1 took off at 7:30. The band played “Jingle Bells” which was quite humorous since it was the middle of May and hot out.

We hadn’t ran a marathon before, so we were put in Start Wave 4 which took off at 8:00. The first 5 kilometers of our race were up a steep, winding hill that went from 200 meters in elevation to 493 meters. We were fresh and full of energy so it wasn’t as bad as it would have been if we had to run it later on in the race.

The next 5 kilometers were up and down the steep stairs on the Great Wall. Most of the stairs were going down, which was nice but rough on the knees. (It also wasn’t comforting thinking about how we would be doing this exact same route in reverse at the end of our race, going up.)

By the time we finished the wall we were at about the 10 kilometer mark. We were still feeling pretty good at that point but the temperature was rising and we were about to make our way through the village portion of the race with no shade. I’m sure many runners were thrilled to be running this part of the race because it was flat, but for us, it was the toughest part, mainly mentally. It seemed to be never-ending and the only thing that kept me going (besides Jessica) were the locals that were cheering us on. 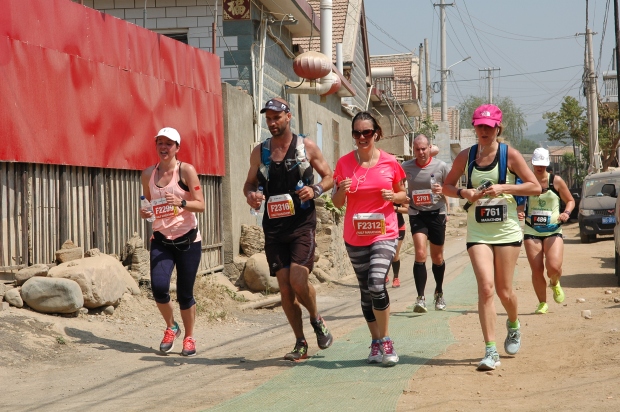 Fast forward to the 20 kilometer mark, we start to have a pretty steep incline. The temperature is now in the upper 90’s and we are running on black pavement which makes it feel even hotter than it already is. Runners are dropping out left and right. Many people we pass by are walking instead of running. It was rough and would have been so easy to quit but we kept on moving. Luckily they added in extra water stations because of the heat so we had probably already drank about 8 bottles of water each at this point (no joke) and still didn’t have the need to empty the bladder.

At the 30 kilometer mark we were almost finished with the village portion and had about 5 kilometers of flat running back to the wall. This portion was also miserable because of the temperature and the pavement radiating heat, however, once we made it back to the starting line we knew that the possibility of finishing the race was much greater. We had about 10 kilometers left to run and then we would be finishers of our first marathon, one of the world’s toughest marathons at that!

The elevation from the 35 kilometer mark to the 37 kilometer mark went from 250 meters up to nearly 500 meters. Some of the stairs were higher than our knees. We had to crawl to make it up. This was by far the hardest thing I have probably ever done, but knowing we were that much closer to the finish gave us an extra adrenaline rush to get through. We passed grown men crying. People were still dropping out of the race even though they had already gotten that far. It was so grueling and painful but once we reached the top peak of the wall and saw that it was all downhill from there, we knew we were going to finish. 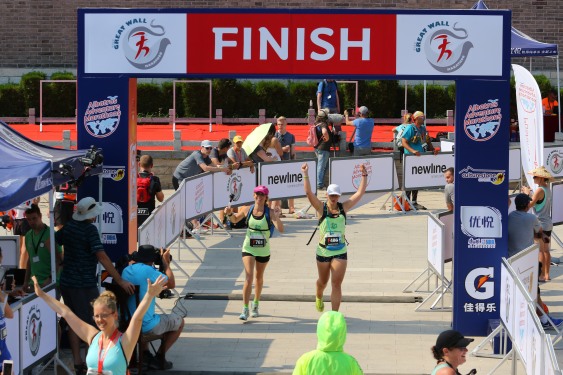 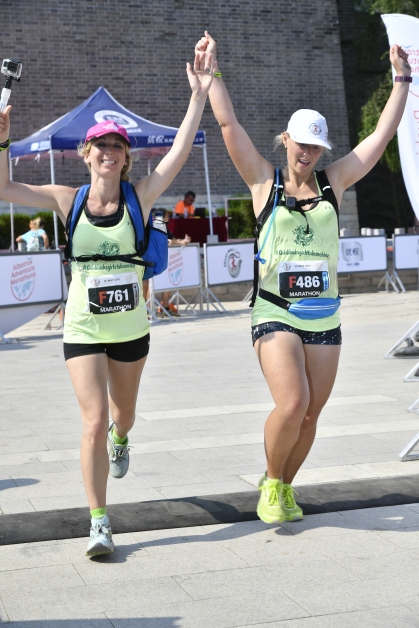 We really did it. We completed our first marathon on the Great Wall of China, one of the toughest marathons in the world. There were 5,164 stairs; temperature was 100 degrees; there were hills with insane incline for miles. It was miserable yet beautiful and one of the toughest things we have done in our lives. There were runners from 59 different countries and we were able to meet some amazing people that share the same love for running that we do. This will definitely be something we will always remember. 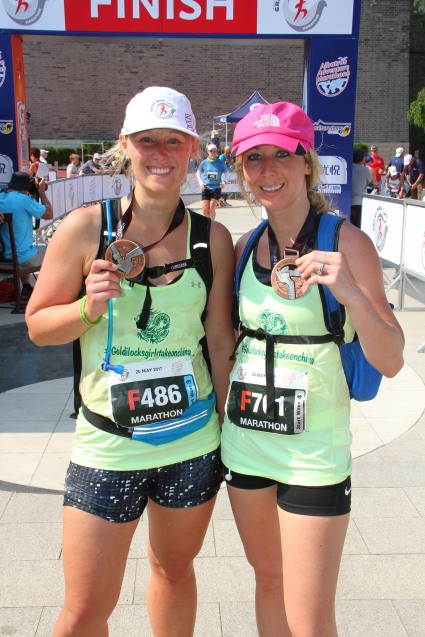 One thought on “Great Wall Marathon 2017”