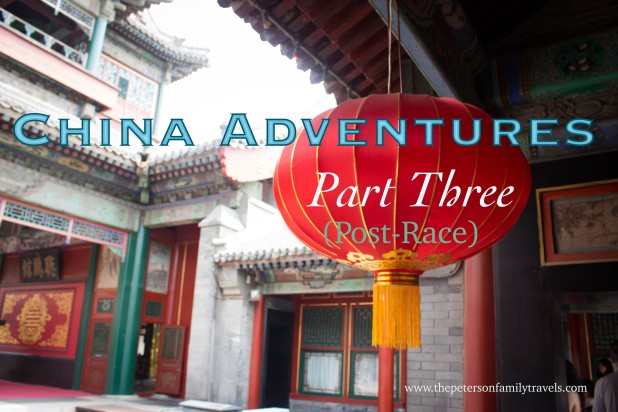 After running The Great Wall Marathon we boarded the bus and headed back to Beijing for the remainder of our trip. It wasn’t fun being cramped up in a bus for 4 hours after running a marathon but we tried to make the best of it and reminisced our great accomplishment with the other runners. 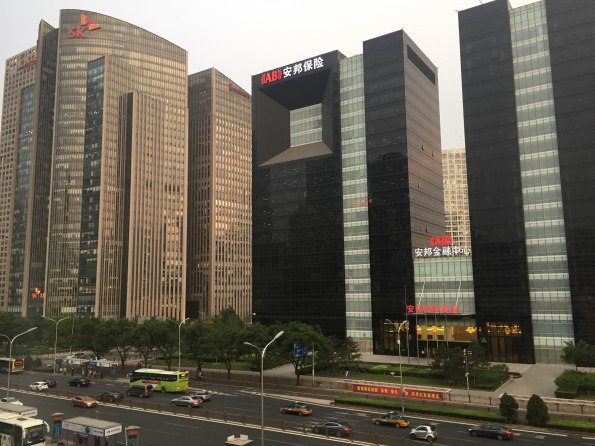 View from our Beijing hotel

After arriving at our hotel, we cleaned up, ordered room service and passed out. (Our room service guy almost passed out too after he smelled our IcyHot. He ran out of the room and fell to his knees outside the door. Whoops!)

The next morning we woke up early (and sore) for a day full of exploring Beijing.  Our first stop was the Beijing Zoo to see the endangered giant pandas. They were SO CUTE! I felt bad for the poor guys though. 😦 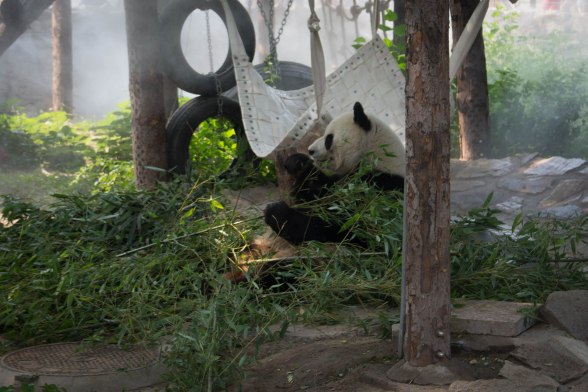 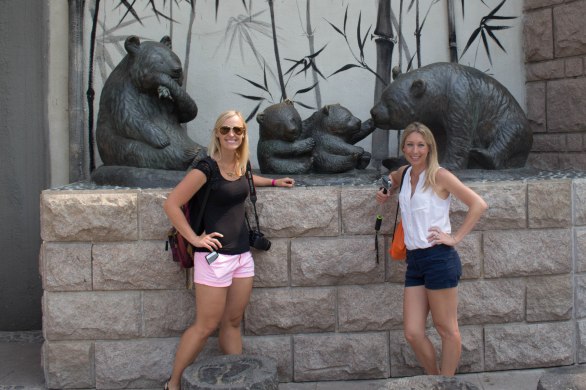 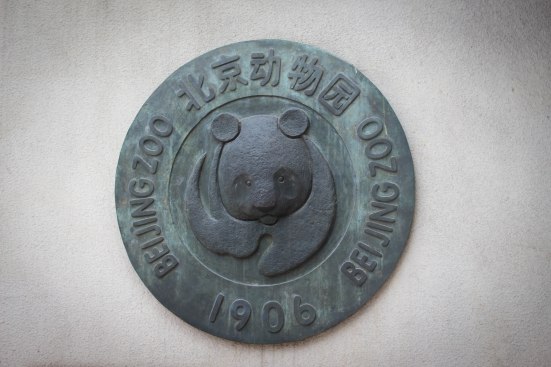 Our next stop was the Summer Palace, just outside of Beijing. The Summer Palace was built during the Jin Dynasty several hundred years ago as a getaway spot for royal families. The grounds were full of beautiful gardens, pavilions, temples, palaces and the beautiful Kunming Lake. 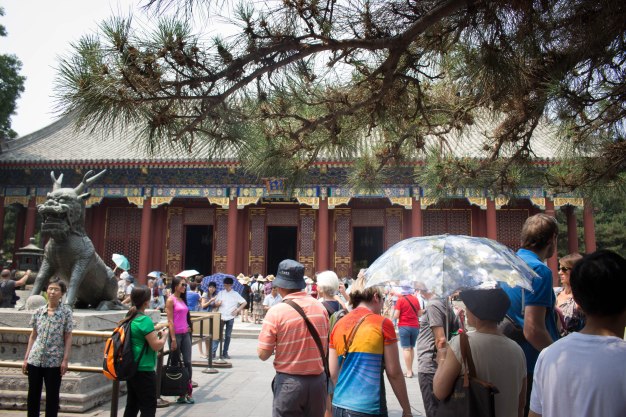 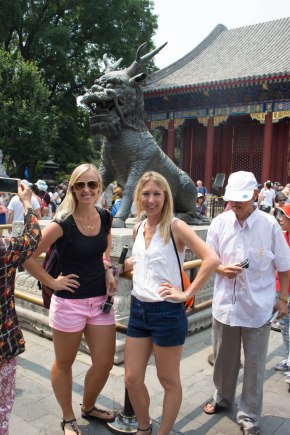 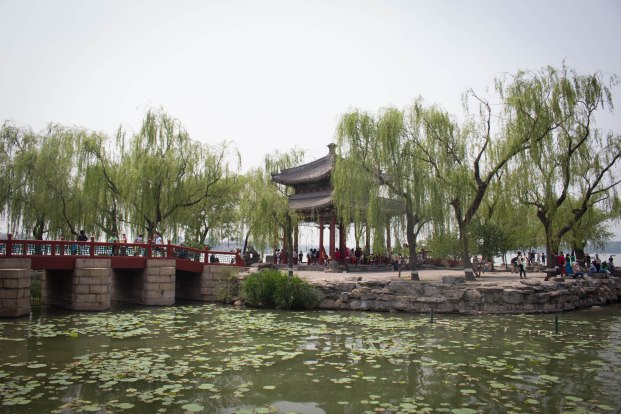 The Summer Palace has been renovated numerous occasions after being vandalized by Anglo-French troops in the Second Opium War (1850’s) and being set fire by foreign troops during the Boxer Rebellion in 1900. In 1998, UNESCO named it one of its World Heritage sites. 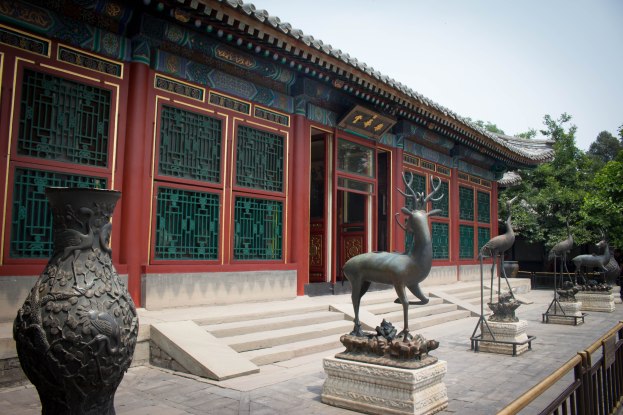 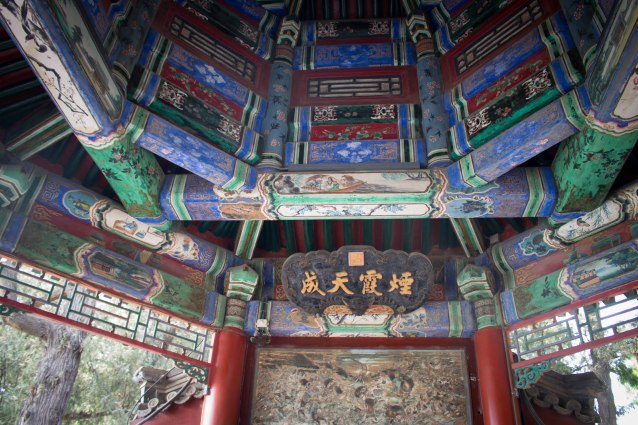 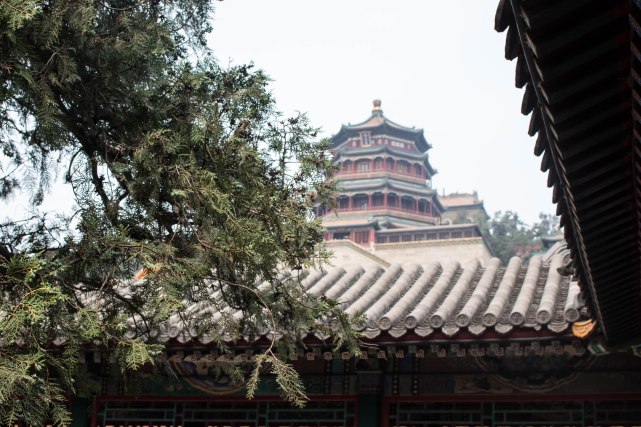 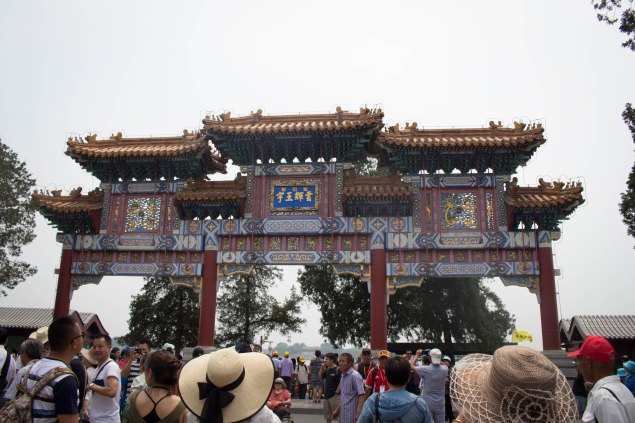 These cute kiddos wanted a photo with us. 🙂 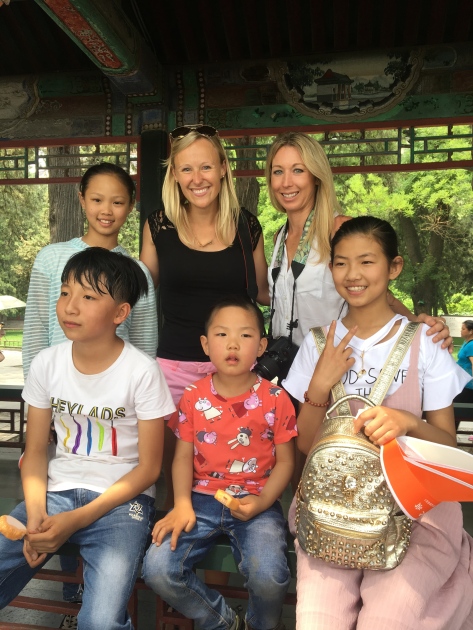 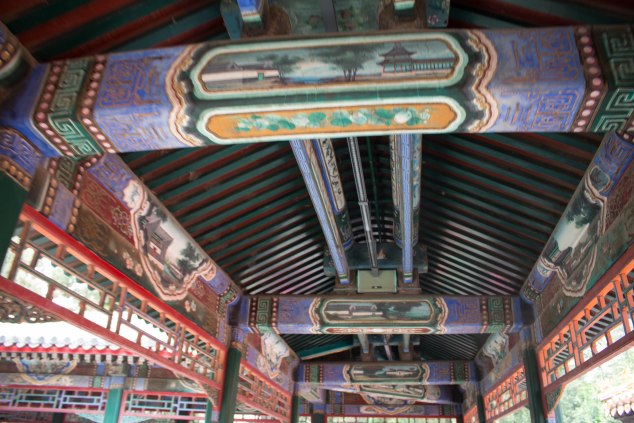 We had lunch at the palace before catching a lovely performance by Chinese dancers. 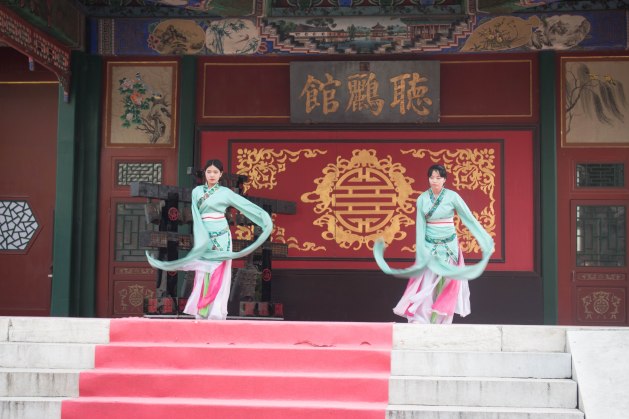 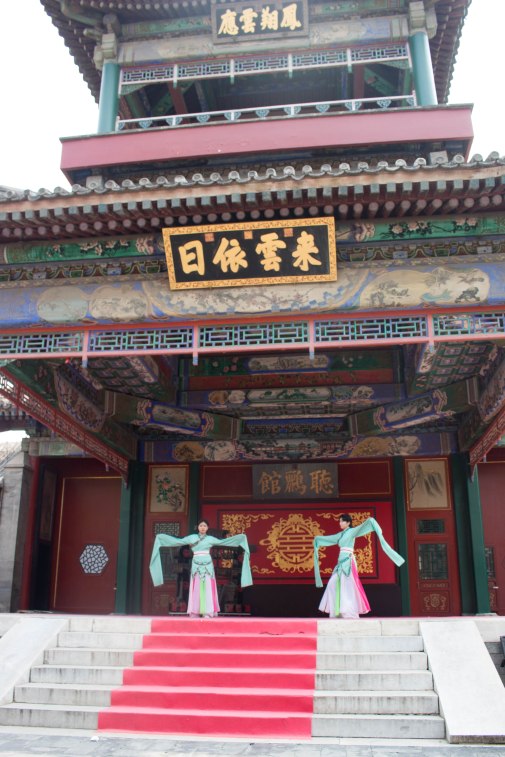 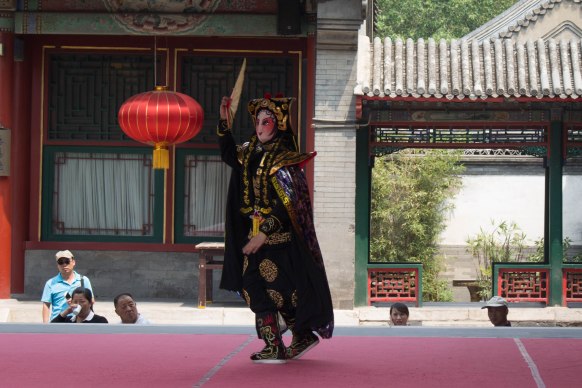 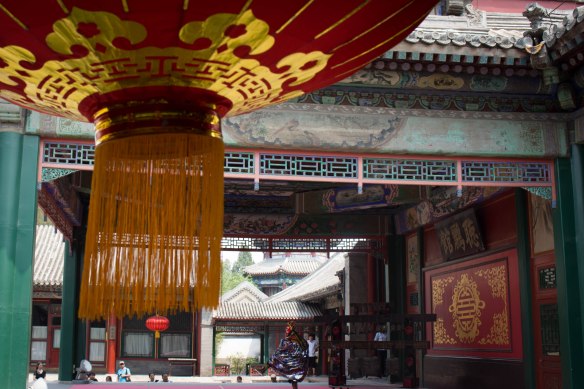 The Marble Boat pictured below is also known as the Boat of Purity and Ease. It was first built in 1755 and later restored in 1893 after being destroyed in the Second Opium War. The two-story structure is made out of wood but painted to imitate marble. 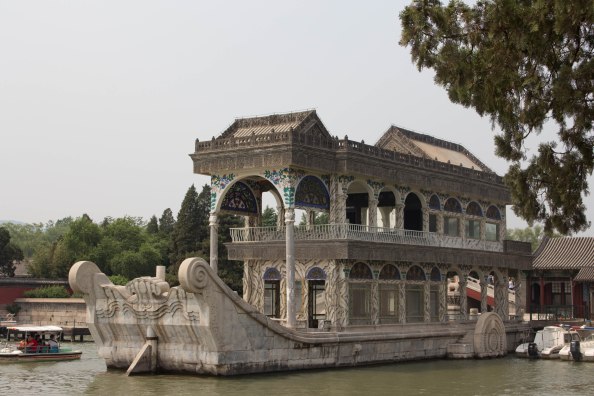 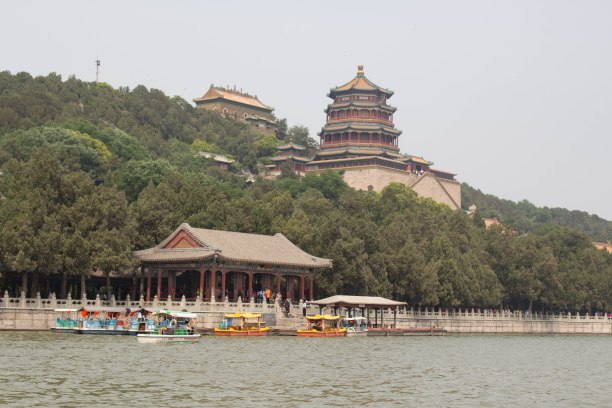 We took a quick ride across the lake on a dragon boat before catching our bus to the next tour stop. 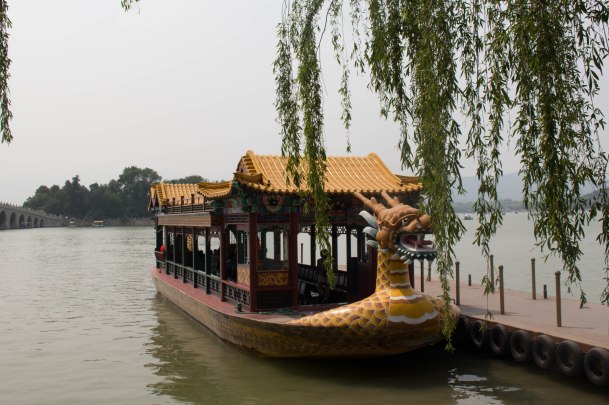 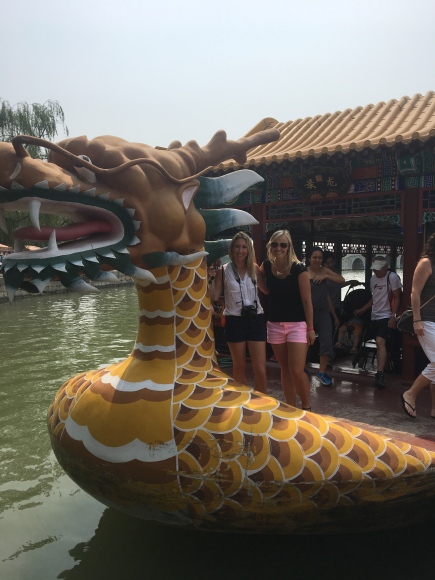 Our last stop was to have an afternoon tea. We were able to try a variety of Chinese teas that were all very tasty. It was a great, relaxing ending to our tour. 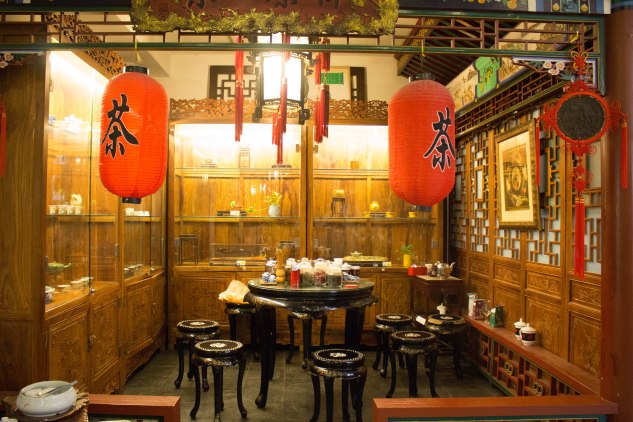 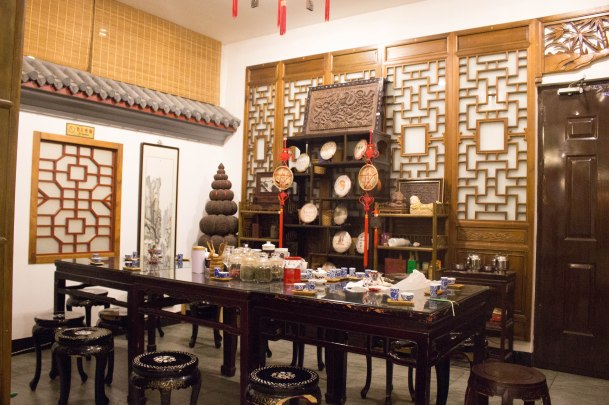 After arriving back at our hotel we had some time to get ready before heading out to our final dinner with the other runners. We enjoyed a variety of Chinese foods and said our final goodbyes. 😦 Our trip to China was an amazing experience and something we will never forget.